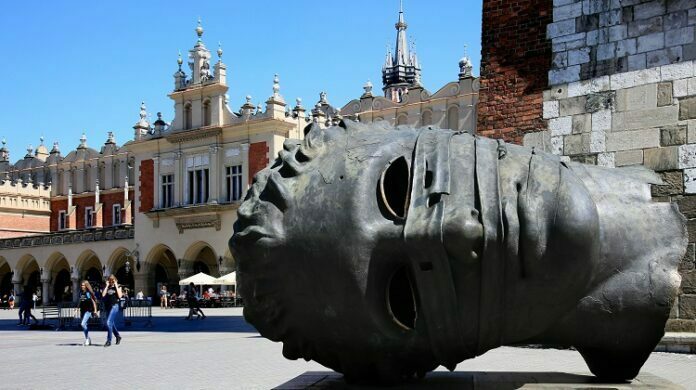 Krakow’s folklore legend of the Wawel Dragon permeates through the vibrant city life and is visibly honoured with landmarks, statues and festivals. The Wawel Dragon myth and legend reaches as far back as the beginning of Krakow city itself, more than a millennium ago the stories and tales were abound,

Krakow was besieged by a dragon that dwelled in a cave at the bottom of Wawel Hill on the banks of the Vistula River. The locals feared walking the streets and the growing terror amongst the citizens prompted King Krakus to offer his daughter Princess Wanda’s hand in marriage as a royal prize to any honourable citizen, knight or Lord who would rid the city of this people eating dragon who also had a penchant for maidens and virgins. Many tried but failed to kill the dragon until a shoe-maker’s apprentice, Skuba Dratewka, came forward with a cunning plan that would see him win the hand of the princess. He stuffed a dead sheep with sulphur, the dragon bait was placed near the dragon’s lair and so the trap was set. Upon eating the sulphur filled sheep a great thirst ensued with the uncomfortable burning sensation in the dragon’s stomach. The dragon stumbled to the Vistula shore line and drank. The sulphur on contact with water reacted violently and with such force the dragon exploded into a million pieces and so the terrorised inhabitants of Krakow were set free of the Wawel Dragon’s evil reign. Dratewka and the princess married and were given a splendid town house to live in which still exists in part today.

The Wawel Dragon legend is celebrated with the Great Dragon Parade every year. Hundreds of school children undertake the challenge of building a dragon in their schools which is then paraded around Planty, the pedestrian circular path around the centre to finish on the main square, Rynek. Judges make their decisions on the most enterprising dragon construction and the coveted Wawel Dragon Trophy is awarded. A huge communal picnic and Knight’s Feast are also organised on the banks of the Vistula River for all attending or participating in the Great Dragon Parade. Krakow’s oldest theatre company, Groteska, re-enact the slaying of the dragon with giant puppets and a light and firework display is the grand finale. This normally takes place at the end of May over a weekend. There is a lot of dragon themed entertainment for both children and adults included in the 2 day spectacle.

To continue on the dragon trail a visit to the supposed dragon’s lair is open to the public, an eery cave with further caves within caves and crawl ways at the foot of Wawel Hill but enter at your own peril, you never know if all the dragons were slain. Nearby on the waterfront, to commemorate the Wawel Dragon Legend a 6m tall bronze dragon that actually breathes fire which if you have patience fires up every 10 mins or so for your selfies with it. The next dragon trail feature is in the grounds of Wawel Castle which was built on top of Wawel Hill after the dragon was defeated. If you go to the entrance of Wawel Cathedral within the castle’s walls you will see a huge bone chained above the cathedral door, the is believed to be of the Wawel Dragon, one thing for sure it is not a human bone. The dragon bones have hung there for hundreds of years as the cathedral was built in the 14th century and folklore has it the bones have magic powers, although to what purpose is difficult to ascertain.

To emphasise how much the dragon myth is so prominent in Krakow the documentary, animation and short film event, Krakow Film Festival, has named its top prize award the Dragon of Dragons Award and the Golden Dragon Award for the director of the best short film. Also, the trend of tattoos has boosted the krakow tattoo artists with the Wawel Dragon becoming a popular request to have inked onto bodies and limbs with a plethora of artistic designs to choose from. There is also the town house of the apprentice shoe-maker who vanquished the dragon, his cellar is now a bar and the accompanying open air relaxing garden bar is open too. The clever cobbler actually turned to wine and beer making in his later years it is said. The building and floors above the cellar bar is now a modern Krakow hostel aptly called Draggo House, the whole edifice is just off the main square in Ul. Gołębia. More information of the Krakow hostel You can find here: https://draggo.house/en/. The local rugby club, Juvenia Krakow RFC (who are also co-organisers of the famous Krakow Rugby Festival), use the nickname of Smoki or Dragons in English. Even the train service between Krakow and Warsaw was called The Dragon. Harry Potter fans will know the game of Quidditch featured in the books and subsequent films and Krakow has its own team of Quidditch players, yes, the Krakow Dragons. The Harry Potter craze brought about the real life sport of Quidditch and Krakow was quick to follow it, the Dragons are national champions and qualified for the European Championships, c’mon you Dragons!

When visiting Krakow the dragon trail is all around you, from the Dragon’s Den to the many souvenir shops to the bars and pubs offering dragon themed drinks and the great Wawel Castle built on the crest of the dragon’s lair. The rich history of Krakow and in particular its Wawel Dragon Legend will lead you to discover more connections to this magical city of dragons, kings, queens, heroes and heroines that make Krakow one of the most popular European destinations.