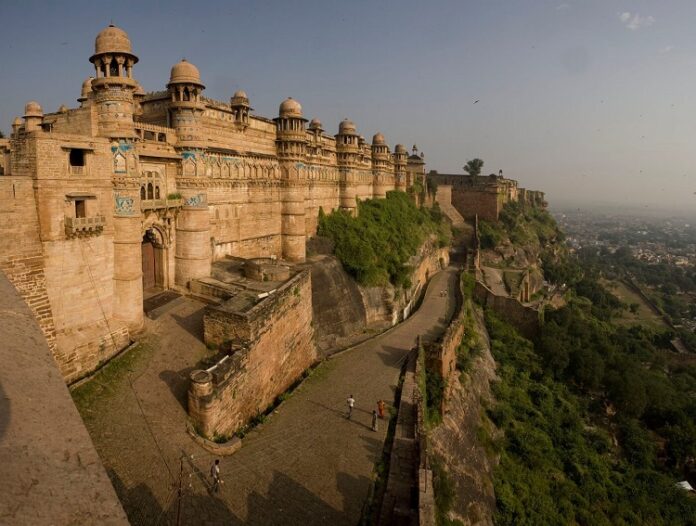 In India there many biggest forts while Rajasthan an Maharashtrahas the most number of forts. These structures that were crafted ages and still stand and they maintained their beauty throughout the years.

Here are some biggest fort of India which we mentioned below.

Mehrangarh Fort is a royal fort and it is situated in Jodhpur, Rajasthan. This fort amongst the popular tourist place in India. This fort is situated on a 150 m high hill and the interesting fact about this fort that you have to cross seven gates to reach the fort and these gates still bear the marks of various fought and these gates are built in the honour of victory. Inside the fort, there is museum also which exhibits a rich collection of palanquins, musical instruments, royal cradles, costumes, arms, furniture and paintings. This fort is open on all days of week and the timings are 9.00 Am to 5.00 Pm.

Jaisalmer Fort is one of the largest forts in the world and it is popularly known as Golden Fort because it is made up of yellow sandstone. This fort is located in Jaisalmer city in Rajasthan, India. This fort is the heart of Rajasthan and this fort is standing in the middle of the golden sand of Thar Desert and it is one the most prominent tourist attraction of Jaisalmer. Inside this fort tourist can find several architectural buildings and there are multiple entrance gates and the most interesting things to see in this fort include Maharawal in chauhata square, Raj Mahal and Jain temple. Timings of this palace from 9.00Am to 5.00Pm so plan according to your time to know about this fort.

Red Fort is a historic Fort which is situated in Delhi. The height of the Fort is 18 – 33 meters and it is designed by architectures. And it is constructed by Mughal Emperor. They start to built this Fort on 12thMay 1639 and end this project on 6th April 1648. It took around 9 years to complete. This fort is architect by Ustad Ahmad Lahori. The fort is plundered of its artwork and jewel during Nadir Shah. Most of the fort’s expensive marbles, stone and jewelries steal by the Britishers. Every year on the Independence Day our Prime Minister hoists the Indian Tricolour flag on the date of 15th August. It has a big museum a Diwan-e-Am and a Diwan-e-khfor which aleays open for public.

Panhalal Fort is amongst the biggest fort and it is situated about 19 km away from Kolhapur. This fort is built on the sahyadris and it has numerous tunnels out of which one is almost 1 Km long. This place is not just a must visitfor the people who love historic places but also for those who love to trek. Inside the fort, there is a large amberkhana which has the capacity of containing 25000 Khandis of grains. This fort also has temples of Mahakali, Ambabai, Someswar and Sambhaji and there are several structures in the fort like Teen Darwaza, Wagh Darwaza, Andhar Bavadi, and many more attractions. The best time to visit in this fort between the month of October to March.

Agra fort is a historical fort and it is situated at Agra, India. This fort is spread over 94 acres and it was constructed by the great emperor Ashoka in 1565. This fort is listed among the world heritage site by UNESCO and the fort is made up of red sandstone. There are more than 500 buildings inside the fort. and it was close to Taj Mahal. There are some well known sites within the Agra fort are Diam-i-Am, Diwan-i-Khas, Anguri Bagh, Khas Mahal, Pearl Mosque, Naubat khana, Golden Pavilions and Jahangiri Mahal. Everyday thousand of tourists visit and its beauty attracts the tourists.